There are “spoilers” in the following discussion. I am writing this assuming that you have read all four of the Inheritance novels. I’ll also make comments about a number of other books, including Dune, Star Wars, Harry Potter and my Introduction to Fantasy. So if you have not read them, go do so and then this will make sense. 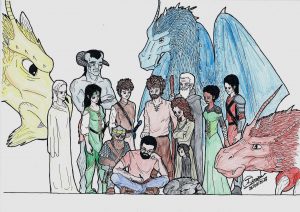 I found this illustration and thought it quite nice. How may of the characters do you recognize? And I thought it might be worthwhile to put this here, as a sort of gateway to the rest of this post. This post/essay has all sorts of spoilers in it. Plus, it’s written with the assumption that you have read all four of the books in the series. This also assumes you have read the other books mentioned above. I really do not think the following will make much sense, otherwise.

The first thing I noticed when I began Eldest was that it began at the exact moment that Eragon ended. I was quite surprised. It seemed logical, to me, that Paolini would summarize the next few months/years as it made sense to me that a 16 year old boy would not be leading an army against an all-powerful god-like king. The next thing that surprised me was the kidnapping of Murtagh. Paolini was definitely full of neat surprise twists and turns.

There is a most important difference between Inheritance and Frank Herbert’s Dune. If you have not read that book, I highly recommend it. It’s full of political intrigue. Herbert’s main character defeats the emperor, as does Eragon; but, unlike Maud’Dib, Eragon does not take over the throne. He was seventeen, as best as I can figure it. Maud’Dib was, as I remember, in his twenties. And Maud’Dib had been raised as nobility. Eragon, though he could claim nobility through his father and mother, did not think of himself as nobility. Alexander the Great was twenty when he assumed the throne. Luke Skywalker is also quite young, late teens or early twenties, when he kills the emperor. We’ll return to that tale in a few paragraphs. I just want to point out that it is not unusual, in history or fiction, for the young hero to assume the throne. But it does not always happen.

Another story that parallels Paolini’s tale is that of King David of Israel. David was probably 16 or 17 when he killed Goliath. He spends years as a rebel, hunted by the ‘evil’ king Saul. I’ve never read anything quite like the story of David. If you have never read 1st Samuel, go get a Bible and read it. Read it for what it truly is, an account of a national hero. Understand that the writers of 1st Samuel were first and foremost trying to explain the personality of their God, YHWH, in their tale. But they do relate a story that is most inspiring. Read it carefully, for David does not come across as a “perfect” man. His flaws are like tiny cracks in a piece of fine porcelain.

Paolini does the same sort of thing with Eragon. Consider the scene where Eragon takes Sloan out of Helgrind and finds Sloan’s “true name”. That is very much like David in the cave cutting off the piece of Saul’s robe. Think about it, what would you do when your adversary is delivered into your hands? It is to the credit of both characters that they rise above their sinful desires. Eragon’s ‘sins’ include racism. That Eragon is quite prejudiced against Urgals is described several times. What makes Eragon’s prejudice useful is that he acknowledges it. In addition, because he desires peace more than destruction, he finds a way to bring peace to the various races. Meeting Eragon or Murtagh on a dragon is one thing, meeting an Urgal or Kull riding one is quite something else.

But it is with the concept of God that I think Paolini struggles. His writing reveals the struggles of a young adult who does not really comprehend the nature of God. To his credit, Paolini shows us that the Dwarves’ god is real. But Eragon, apparently like Paolini, does not know how to believe, nor does he understand the actual nature of belief. At one point Eragon prays to the Dwarves’ god. His prayer is answered. Later, he finds that he cannot pray to the god again. This does make logical sense in that Eragon is a Rider. He now knows almost as much about magic as anyone in Alagaesia, thus he thinks he has no need of the help of a god. And he has begun to comprehend that he might live for more than a thousand years. He’s seventeen. He’s accidentally found a key to the heart of humanity: we can’t live with the knowledge of the consequences of our actions. That’s why the king kills himself. That knowledge is his undoing. It does give a hint as to what Paolini might think Hell to be. Paolini ends the Inheritance Cycle with Eragon not knowing what to believe.

There’s not a lot, in my opinion, that is shared between Star Wars and Inheritance. True, we have a farm boy who meets a couple of mentors and goes on a quest to kill an evil, god-like emperor with the help of a Rebellion. But, as I commented in another essay, that’s right out of Joseph Campbell’s description of the “hero”. In Star Wars racism is almost non-existent. Religion is mainly stuffed into the concept of “the Force” and that is explained as a biological/physical process. The political intrigue is minimal, just the Empire bullying its way around the galaxy. Mostly, Star Wars is escapism in the form of a science fiction adventure. It is, on the whole, quite shallow. That said, I do like the movies and watch all six of them from time to time. They’re fun.

But the main difference, for me, was that once Star Wars was concluded I did not feel like I missed the characters. Yes, I enjoyed the story and wanted to see it again. But I did not feel any emotional bond with them. I began to miss Eragon as the novel came to a close. It might be that Paolini had spent many many years of his life with Alagaesia and now he sends his main character into a sort of exile. I imagine the sadness that Paolini felt at ending the story was transferred into his writing. Eragon says “Good-bye” to everyone he knows, except for Saphira and a few elves. But Eragon does have a future: he’s going to be Dumbledore, Yoda and Merlin all rolled into one.

Now, while the Star Wars franchise has been very successful, it does seem to have lost its focus. #7 and #8 seemed, to me, to be like the star high school football player who keeps retelling his glory days story. I hope Paolini does not do that. I would rather imagine my own tale about a couple of kids who get the dragon eggs to hatch for them and they go the Rider’s school. One thing Star Wars did get right was to create new central characters/heroes. Once the emperor was dead, Luke’s story was done.

Paolini had the task of tying up loose ends once the emperor was dead. It was decent of him to take us through that. Good story telling is to take the reader/listener to the climax and then end the tale. But to end it with a lot of loose ends just won’t do. Readers will want another volume to explain what happened to the characters. Most important is the question, “Was all this worth it?” The various nations/races unite under Nasuada’s rule. Peace prevails. Eragon heads out to start the training school for the Riders. And Murtagh and Thorn head “north” to seek psychological relief. Even Sloan gets to see his granddaughter. Still, Paolini has let us know that some Ra’zak eggs lie in hiding somewhere. And he’s hinted that there are creatures of power we do not know about. Now that’s a great way to tie up the necessary loose ends and leave a few for us to ponder. By the way…what did happen to that belt?