October 5th. Our son, Andrew, was born on this day. Unfortunately, he lived only 11 days. Perhaps I will tell that story sometime. Today I tell him a story.

Aidan took a deep breath and stepped into the stone circle. His grandparents had told him about stone circles. It was his Aunt Bridget who had told him about this one. She had said some other things, too. At any rate, this would be an adventure.  He looked around and saw that nothing out of the ordinary had happened. He walked around, touching the standing stones. They were, as most stones are, cool to the touch. And a bit rough, like heavy sandpaper. He made a final circle, touching each of the stones. Disappointed, he took off his backpack and sat down next to one of the stones. It cast enough of a shadow so that he did not have the hot sun beating down on him. He took a drink from his water bladder and then pulled out his lunch: a peanut butter and grape jelly sandwich, some cheese flavored tortilla chips and some apple slices. 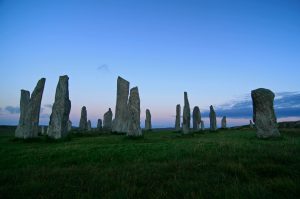 He was rather disappointed. It had been a long hike. The hike up the hill to the stone circle was quite steep and rather sandy. He literally had to climb up with both hands and feet. The weather was quite hot and humid. So he was sweaty and tired when he reached the top. It would have been wonderful to experience the power of a stone circle.

But not everyone got to do that. The peanut butter sandwich was quite tasty. And the apples were better than he had remembered. The crunch of the chips was louder and crispier than he had noticed before. Even his water tasted sharper, clearer than water usually tasted. He noticed that it seemed to get a bit darker. Clouds were forming. Low clouds that looked like rain. He could see that they were some distance away, but rolling in from all sides. And he could see them so very clearly. The air felt heavy and damp. This might be a very strong storm. Quickly finishing his lunch, he started to stand up. But he could not. His legs seemed to be asleep. They were not tingling. They did not feel funny. He just could not move them.

Rain splashed his face. He was quickly soaked. Except it wasn’t rain. He was floating in a lake. Looking around, he was quite close to shore. A short swim and he was standing on a mound of tiny shells. Some of the snail-like creatures that had made the shells began to climb onto his sneakers. He tried to flick them off without hurting them, but they seemed to adhere to the leather. A big wave splashed his sneakers and some of the snails washed off. So he stepped back into the water and the remainder of the snails quickly floated away. He stepped out into deeper water. He had enjoyed his swim and thought another good swim might be fun.

A large splash attracted his attention. Then he had a weird shock: the creature that made the splash was like nothing he had ever seen before. It looked like a pony with the head of a duck and the flippers of a dolphin. It was splashing and jumping and frolicking—if one can frolic in a lake. It seemed to be laughing. Aidan stared at it for an extra long minute.

The creature moved toward him. It seemed to be smiling; offering friendship. Then it began to splash the lake surface with its flippers, splashing him with water. Aidan suddenly realized that this creature was not a happy, friendly animal. It was terrified of him. That was not a smile, but a grimace. It was not frolicking, it was frightened.

He started to turn away from the creature, then thought better of that. So, he backed up, slowly. A quick glance and he saw that he could safely back up; no mounds of snails were behind him. As he backed onto the shore, the creature seemed to calm down. It began moving back toward the center of the lake.

As the creature was no longer facing him, he took a long look around. The lake was maybe a couple of miles wide. However it stretched from horizon to horizon. Across the lake he could see cliffs rising up above the lake and something green that extended beyond his sight. Behind him, rising up over a hundred feet, was a wall of rock. He could see something on top of the cliff, but he did not recognize it. The shore beneath the cliff was an expanse of sand, dried brownish seaweed, an occasional piece of driftwood and billions of tiny shells.

He noticed something odd in one place on the rock wall. Moving closer, he realized that it was a stair: someone had carved steps into the wall of rock. About halfway up the side of the cliff he noticed a rather large platform. Climbing the stairs took much less effort than he thought it would. At the top of the stairs was a large platform built of inlaid stone of various colors. The inlaid stone formed a rather beautiful pattern. Standing on the edge of the platform, he looked out at the lake.

While he could see the objects in front of him very clearly and in sharp focus, he had difficulty recognizing exactly what he was observing. His impression that there was a cliff on the other side was apparently correct. He could see no sign of any buildings, only what now appeared to be a vast forest. There was a disturbance on the surface of the lake, maybe two or three hundred yards out. When he finally understood what he was observing, he was astounded. It was a whole herd or flock of the creatures. Some were babies. Others were much bigger than the one that chased him out of the lake. These creatures really were frolicking. He could see that their movements were now much different. 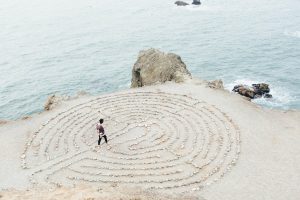 Turning his attention to the pattern of stones in the platform floor, he was surprised that he recognized the pattern. It was a very ancient design, familiar to him because his grandparents had a rug with the design hanging on the wall in their hallway. While he had always wanted to take the rug down, lay it on the floor and walk around the pattern, he never had. Today, with the pattern on the platform before him, he would walk the design.

As he took the last step he felt the floor give way. He was dropping through space and time, it would seem. He quickly lost consciousness.

He woke up in the stone circle, sitting up against the standing stone. The sun had moved and was now beating down on him. He could move his legs and so he stood up. That’s when he realized that he had been wet. The sun had dried the front of his shirt and jeans, but his back was still damp. And his sneakers were still wet. He must have slept through the rain.

A couple of steps and he felt something in his shoes. Sitting down, he took them off. In his shoes, stuck to his socks, were a few of the tiny shells from the lake shore!